When it comes to home security, one of the biggest concerns most people have is with their locks. At Top Notch Locksmith, we regularly get asked which locks are the best for security purposes and, subsequently, which are the hardest locks to pick. Particularly with the advent of online shopping, obtaining a lock picking kit is easy, whether or not it’s legal in your area to have one. With the ease at which it’s possible to get a lock picking kit, opportunities for thieves abound. So, here’s what you need to know about picking locks and protecting your home from this method of home break-ins.

Most door locks used for residential purposes are a standard 4-pin tumbler lock. What this means is, inside the lock, there are four cylindrical rods stopping a lock from turning. When the right key is inserted into the lock, the dips and peaks of the key line up and push those cylindrical pins up to just the right height to allow the tumbler to turn. The tools in a lock picking kit allow a locksmith (or a thief) to push those pins up and turn the tumbler, disengaging the lock without a key. Really, you don’t even need a lock picking kit to unlock a 4-pin lock; if you have the time and patience, it is possible to pick a lock with a couple of bobby pins. You can see how a 4-pin tumbler lock works in this locksmith’s video.

Now that we’ve explained that, you may be feeling a bit paranoid about your locks. Don’t worry! While lock picking kits are easy to obtain, that doesn’t automatically make lock picking easy to do. The good news? Most burglars don’t actually bother trying to pick a lock. According to a survey of convicted burglars performed by a team at the University of North Carolina at Charlotte, only 12 percent of those interviewed said they would typically plan a burglary in advance. The vast majority of burglars chose times and targets in an opportunistic manner. What does this mean for you as a homeowner? Lock picking is one of the lesser methods of a break in. By and large, the home burglars surveyed said they would knock first to determine if anyone was home, then try the knob. If the door was locked, most reported that they would force open a door or window—a thief is not worried about damage to your home as much as they are worried about their ability to get in and out quickly. The moral here is that lock picking isn’t necessarily a big concern when it comes to burglary entry methods.

There are a few pretty simple measures you can take to ward off burglary attempts. First, make sure you have deadbolts on all externally facing doors. Sadly, door locks are one of the most common areas in which building contractors cut corners, so even if your home is several years old, it could still have poorly installed locks. A deadbolt is one of the most secure locks, but only if the bolt itself sticks out at least a full inch into the door frame, and the security plate is attached to the frame with screws at least three inches long. Doing this will ensure your doors are difficult and time-consuming to try to force open, which will often deter a thief. 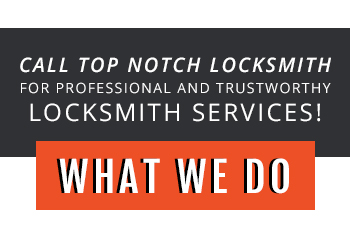 The other primary step to take is to ensure that there is nowhere for a thief to easily hide. An alarm system will go great lengths toward deterring a burglar, but keeping your bushes trimmed can help just as much. One of the primary findings of the UNC Charlotte study was that, the easier it was for a burglar to force their way in unnoticed, the more likely a home was to be a target. So, easy steps toward protecting your home include trimming or removing tall bushes, locking all doors and windows any time you’re not home, and taking steps to make it appear as if you are home, even if you aren’t.

If you’re looking for ways to improve your home security

anywhere in the Philadelphia area, contact your local lock experts at Top Notch Locksmith to get started!